I actually really love making pies. Mostly because everyone loves to eat them. They can pretty much turn every frown upside down!  I made pies for this past years Christmas gathering with my Mom. I had to laugh at her comment when she seen my pies. "I can't believe you can make such nice looking pies!" (she said they were delicious too) I jokingly acted like I was offended but I knew exactly what she meant. Growing up my Mom baked and cooked a lot!  But I could care less to participate especially if I didn't have to. Although I am very thankful that I had no choice in the cooking department a lot of times. I learned to cook, I didn't really have much choice in that matter. When we were a bit older Mom started working out and supper was often left to me. But anyways,  back to the pie topic. So I didn't exactly learn to make pies from my Mom although I'm sure some of it soaked in, indirectly.

So when I say that I make one hell of an apple pie, I'm neither joking or bragging, just simply stating a fact :) 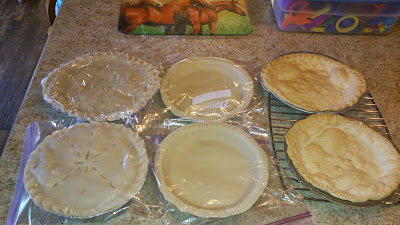