My baby he will always be

Lately my son has really been tugging on my heart strings. The things that come out of his mouth, the things he does, the fact that he's having his 4th birthday in three days, how obvious it is that he loves his sister, mommy and daddy. He is such a special little man that these words don't even do him justice. And I tear up just typing that. Boy oh boy. He is growing up so fast before my eyes.

Today he needed to go poop. Which he is normally very vocal and not shy about. This time he caught himself in mid sentence and came and whispered the rest in my ear so his cousin wouldn't hear. (his cousin is a year and a half older) I understood he needed to go but he was trying to tell me more. So off to the bathroom we went and once the door was closed I asked him what he was trying to say.

He didn't want his cousin to hear me say that I would help him on and off the potty. (he still uses a little potty seat, needs help on and off the toilet and help wiping) So I asked him if he was embarrassed by it and he said yes.

*we have been bugging/asking him off and on if he wanted to try on his own and he's just not been ready for it.

So I told him if he wanted we could start practicing doing it by himself.

What about in the Fall, he asked.

I said, we can start anytime, even this summer.

But I still want to be your baby this summer, he says.

Insert>>>> mommy trying not to tear up again!! Lol.

So I explained to him that even when he learns to go potty all by himself that he would still be my baby. That he will always be my baby. Well his face lit up like a Christmas tree and he looked so relieved! It was pretty cute. Then he wraps his arms around me and tells me, I love you so much.

Got to love bathroom heart to hearts! All joking aside, I hope he always feels comfortable talking to me about whatever he wants.

It's funny how kids minds work. We have been talking regularly about pre-school that is coming up in the fall. I want him to be mentally prepared that I won't be staying with him and that it's going to be fun!! So I think that's why he asked about the Fall bc he is associating it with being a 'big boy'.

Another hilarious thing he did today, he was fooling around and hit his head and ear on the kitchen table. Amidst the bawling he spit out the words, is it cracked?????  Meaning his head, lol, he was terribly worried he cracked it open.

He loves playing with earthworms but is terrified of ants, go figure.

He helped me plant my garden, it was so nice. And he helped his grandma rake up grass today. He was so proud that he got to help her!

Anyways, it's his birthday on Monday. I can't wait to give him his present. 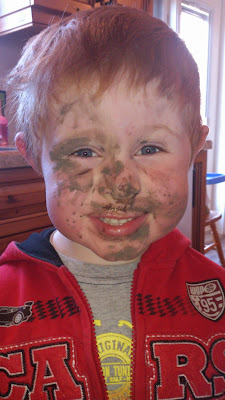 Email ThisBlogThis!Share to TwitterShare to FacebookShare to Pinterest
Labels: Tanner