On the weekend at one of our Thanksgiving gathering some of us girls got talking about home-made yogurt. They knew of several people who make their own yogurt. This intrigued me. So I looked on Pinterest and of course I found several recipes. I found a couple crockpot recipes and one smaller quart jar sized recipe. So I decided to try the quart jar one first. The reason I want home-made yogurt is because I have a bran muffin recipe and it calls for 2 cups of sour cream. We love these muffins in my house and I could be making 1-2 times a week sometimes. Well that starts racking up my grocery bill with all this sour cream. You can substitute the sour cream with yogurt. So I tried it yesterday. And I did it all wrong. I added the powdered milk at the wrong time, then I let it cool down too much before I added my yogurt cultures, and I also did not have a proper warm place to let it incubate. So by the time I was done I felt like I had wasted my time and milk!!! To incubate it I turned my oven on and set the jar on an element on my stove wrapped in a tea towel. This element always get warm when my stove is on. It has to incubate for several hours. Supper time came around and I turned my stove on to make my grilled cheese. (It was a low key, I don't know what to make kinda night) Well it turns out I turned the wrong element on...I turned the one on that my jar of 'yogurt' was sitting on. So I burned the bottom part of the jar plus my tea towel lit on fire!!!!!! (Thank goodness for the rain day ;) ha ha) I threw it outside. SO needless to say I had wrote of the jar of yogurt and left it on the counter and did not even look at it last night. I opened it this morning to dump it out and guess what? I have yogurt!!! It's just plain white yogurt but it worked! So I now have a substitute for my sour cream. Plus it is VERY easy to make and I can't wait to try the crockpot recipe. 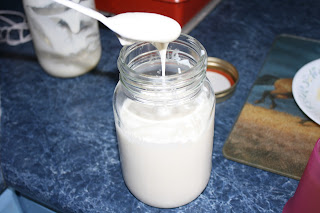 It looks runny in this picture but it's actually the same consistency of the stuff you buy in the store. 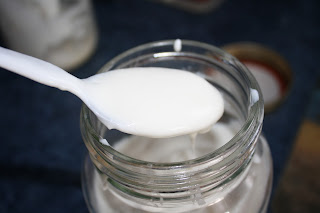 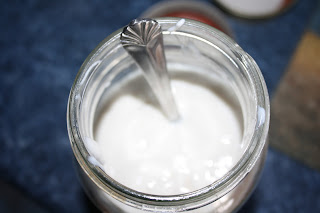 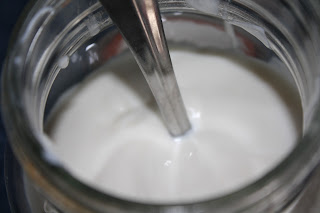 Also Corey, his boss and another guy he works with worked on the basement for couple of hours in the pouring rain! Crazy guys. But I guess it's that much more accomplished! They put the window frames in and one and a half more rows of blocks. 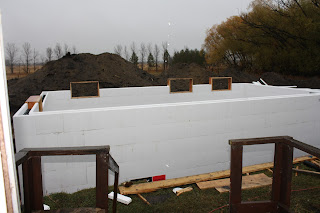 Anyways I am off to the city to the west to get a tool that's on sale for my Hubby. I'm really not in a great mood today so I guess I will go console myself with a Timmies.